So I finally understand what chemo feels like, and realise how “lucky” I’ve been until now. This is my fourth day in bed with one night in A&E under my belt. I’m hoping I’m turning a corner now, as for the first time this week I understood why some people decide to give up treatment as a trade for quality of life. I’m not about to do that even if the best mum I can be to Ted is just to watch him. I won’t give that up until I have to. Carboplatin is the new drug regime, delivered 3 weekly and it has a selfish disregard for normal daytime activities like being awake, eating, sitting, talking. The disease is in my liver, lungs and chest now so it’s also hard to work out whether my poorliness is due to the side effects of chemo or the illness, and tossed in is a big dose of panic which interferes with rational thought. A note on A&E – avoid it at all costs. The staff work so hard but it’s under resourced, filthy and disorganised. As a patient receiving chemo I am not supposed to spend any time in the general waiting room as immunosuppression exposes me to illness from others, the protocol is to hook me up to IV antibiotics within an hour. I opted for the dirty floor of the lobby between the waiting room and outside for the four hour wait. Feelings of anger and my need to self advocate quickly dissipated when I saw some of the other patients in Majors who were really poorly indeed. I still thank god for our NHS every day.

We’re getting married. Thanks to everyone helping. Turns out there is rather a lot to do but things are slotting into place with six weeks to go. Five weeks to go, oops. I’ve taken a scatter gun approach to the organisation and order millions of things online on the basis that I’ll send back whatever is unsuitable. I now have seven veils. I also found a shoe bag containing a pair of too small wedding shoes and several soiled nappies. How does this shit happen to me?

Michael completely knocked my socks off by running the London Marathon having followed the least conventional training plan ever (I.e no training). It was a fantastic day which made me very proud, and he raised over £5k for the Marsden. I feel dogged at the moment by wondering if things are “lasts”…. will I ever go on an underground train again? Will I ever again be charged £8 for a bottle of Peroni and £12 for a glass of house red in an overpriced London hotel? Hope not.

Ted becomes more fascinating, independent and hilarious daily. He’s becoming a busy little boy and his schedule is frequently too full for naps.

“Doubt it mum, I’ve got a half ten with the poison cupboard. Then a game of sweeping which will take me til lunch”

“Oh good you’ll be using your newly purchased safe little persons broom which we bought you to stop your obsession with the rust-flaking grown up version?”

“No mum. Then I’ve got a working lunch with Hetty the Hoover, I’ve got to spend at least 30 mins crying while she isn’t turned on and then 40 crying when she is. Then dredging the dogs water bowl 4 times this arvo. So no nap time”

In my naivety I used to think this meant that he’d sleep like an angel all night through but this bears no relation to reality. Also my baby doesn’t sleep like an angel. Once he finally loses the battle with sleep a cacophony of grunts, yelps and snorts starts. He may look celestial but he sounds like he’s doing an impression of Peter Rabbit with a plastic bag over his head. 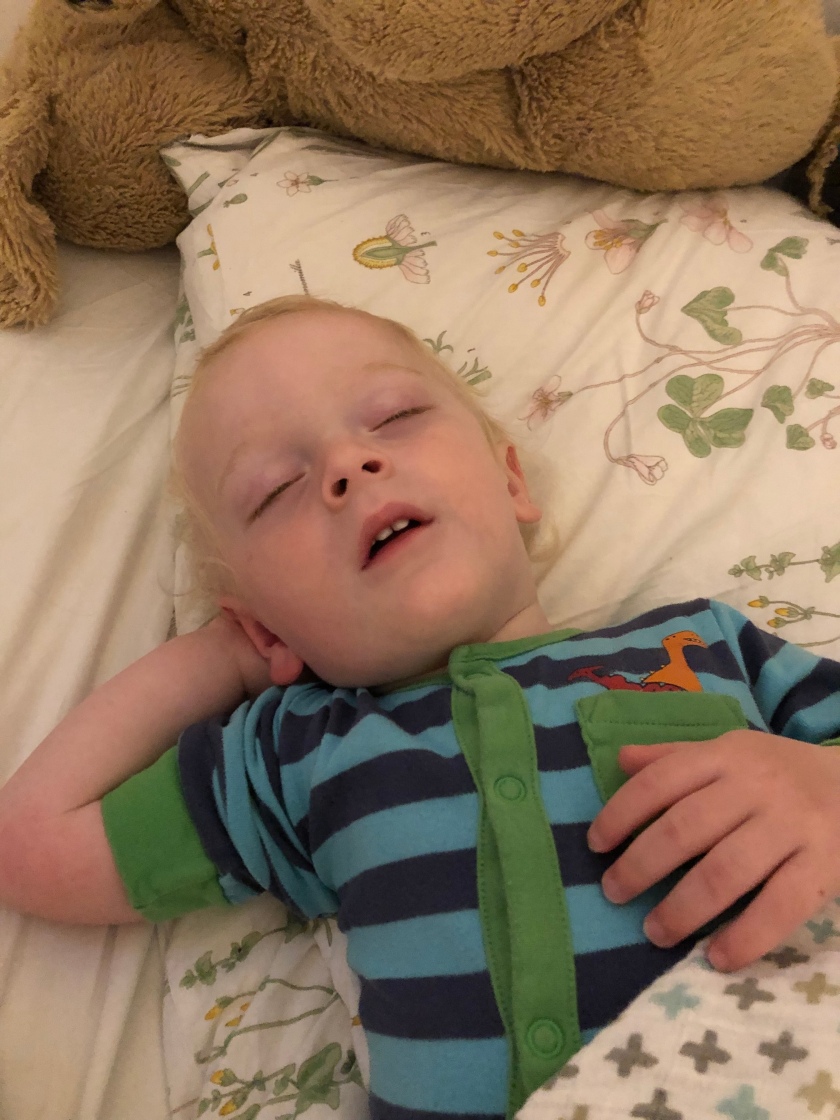 We will keep on keeping on. Things are just as tough for those that love me as they are for me. The plan is to start enjoying something nice every single day as soon as I feel better. Thanks everyone who keeps hanging in there with me.

39 year old loving being a new mum until a little hitch complicated things slightly...! View all posts by alysvictoria1978

5 thoughts on “Keeping on”